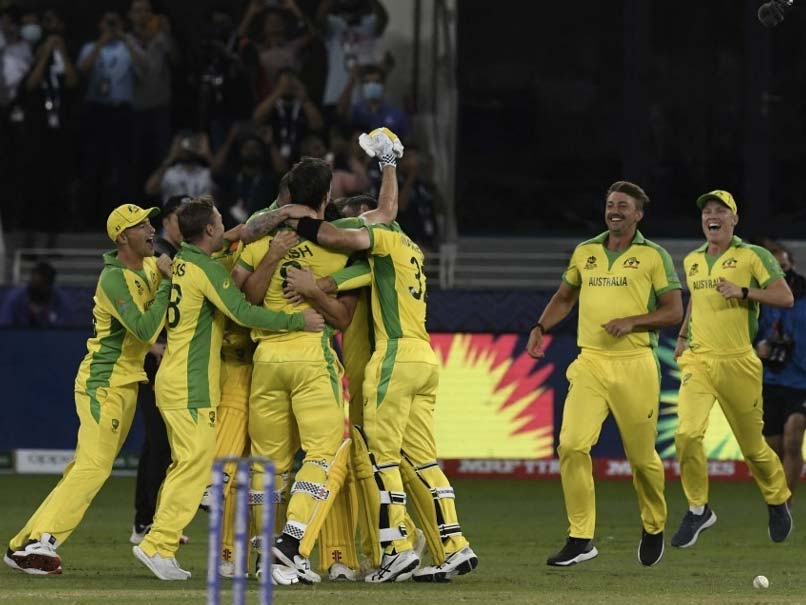 Australia clinched their maiden T20 World Cup title, crushing New Zealand by eight wickets in the final at the Dubai International Stadium on Sunday. Having been beaten by England in the 2010 final in Bridgetown, Barbados, the Australians were not to be denied this time around as they produced a brilliant batting display in the chase to completely outclass New Zealand. Mitchell Marsh (77 not out) and David Warner were the stars in chase for Australia while Josh Hazlewood was the standout with the ball in hand.

Australia started well with Warner hitting a couple of boundaries. However, Aaron Finch’s struggles at the top of the order continued as Trent Boult sent him packing for just 5.

Mitchell Marsh came out to bat at the fall of Finch’s wicket, and immediately hit the ground running, smashing a six and back-to-back fours off the first three balls he faced. The Australian all-rounder didn’t look back after that and proceeded to pound the New Zealand bowling lineup into submission.

If the Marsh barrage wasn’t enough, New Zealand bowlers had to also contend with an in-form Warner, who too found the boundary at will.

Warner was the first to score his half-century, whacking a six of James Neesham to reach the landmark.

Warner and Marsh added 92 runs off just 59 balls to put Australia in complete control in the chase.

Boult returned to give New Zealand a much-needed breakthrough, removing the dangerous Warner for 53 but there was no stopping Marsh.

The lanky Australian all-rounder continued to torment the New Zealand bowlers, also scoring a half-century. He was joined by Glenn Maxwell, who took a couple of deliveries to get going, before teeing off as well.

In the end, Maxwell finished things off with reverse ramp to third man to send the team into ecstacy.

Earlier, put into bat, Martin Guptill and Daryl Mitchell gave New Zealand a solid solid start. Mitchell, who was the hero for New Zealand in the semi-final against Pakistan, failed to replicate his performance and was dismissed by Josh Hazlewood for 11.

Guptill and captain Kane Williamson steadied the New Zealand innings but did so at the cost of the run-rate. The duo made slow progress and Australian bowlers kept things on a tight leash.

But it all changed when Williamson, batting on 21, was dropped by Hazlewood in the deep. Williamson suddenly stepped on the accelerator and flayed the Australian attack. Despite losing Guptill, the New Zealand skipper continued to attack the Australians.

The stylish right-hander tore Mitchell Starc apart as New Zealand zoomed to a big total. Hazlewood returned to remove Glenn Phillips and Williamson in the same over. Williamson fell for 85 just 48 balls in what was one of the most memorable innings of any T20 World Cup.

James Neesham provided some late fireworks as New Zealand posted 172 for four in their 20 overs.