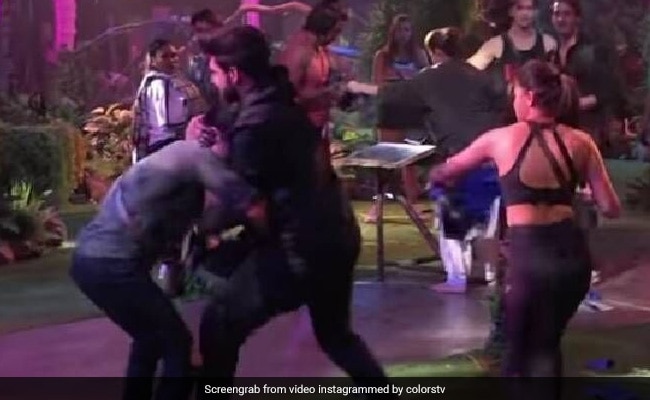 Bigg Boss 15: A still from the house. (Image courtesy: colorrstv)

Tempers are rising in theBigg Boss 15 house and this is not surprising given that nominations and access to the VIP section are at stake. As expected, housemates are at each other’s necks with even simple conversations taking an ugly turn. And, things got worse in the house when VIP and non-VIP members were pitted against each other during a task. And butting heads this time around are arch nemeses Karan Kundrra and Pratik Sehajpal. In a promo shared online, the two actors are seen screaming and charging at each other, only to be stopped by other contestants.

It begins when non VIP contestants Rajiv Adatia, Jay Bhanushali, Neha Bhasin, Simba Nagpal and Pratik Sehajpal get a chance to win an entry into the VIP by ousting current members. As per a promo video shared, the housemates were assigned a task that involves collecting cotton in a basket. Karan Kundrra is seen fidgeting with the basket and the cotton, which is spotted by other housemates including Pratik Sehajpal. Soon enough, Pratik Sehajpal accuses Karan Kundrra of cheating, leading to a major fight.

During the fight, Karan Kundrra and Pratik Sehajpal are seen fighting over the basket of cotton as Umar Riaz tries to prevent the two from getting physical. At one point, Tejasswi Prakash is also seen joining the argument. To this, Pratik Sehajpal says, “Aap chup raho (You keep quiet).” An enraged Tejasswi replies, “Tu hota kaun hai mujhe chup rehne bolne wala (Who are you to tell me to keep quiet)?”

The live telecast of the show available on the streaming platform Voot has revealed that Tejasswi Prakash and Karan Kundrra have lost their VIP status to Simba Nagpal and Pratik Sehejpal.

Last weekend, none of the nominated contestants were eliminated. However, last week, Raqesh Bapat left the house from a bout of health issues and issued a statement that he would not be rejoining the show.  The same week also saw Afsana Khan being asked to leave the show after she picked up a knife and threatened to harm herself for not being chosen to be a part of the VIP section.