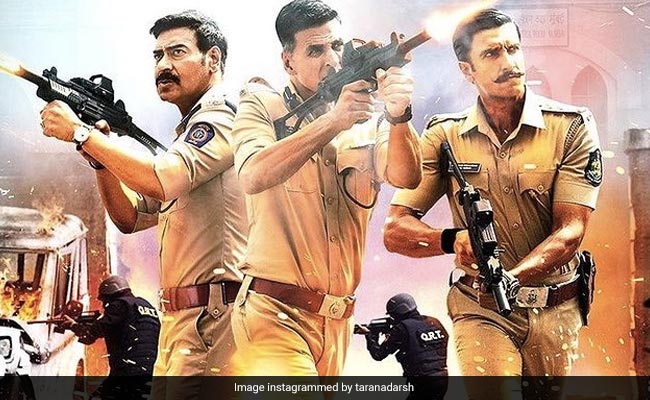 A still from Sooryavanshi. (courtesy taran_adarsh)

The Rohit Shetty-directed film, which released on November 5, opened to largely mixed reviews from film critics. In his review of Sooryavanshi for NDTV, film critic Saibal Chatterjee gave the film a 2.5 star rating out of 5 and he wrote: “To end, the million-dollar question: is Sooryavanshi the film that the doctor ordered for Bollywood’s post-pandemic era? The answer is: well, almost.”

In Sooryavanshi, Akshay Kumar plays the lead role of Veer Sooryavanshi, a character that was introduced as an Anti-Terrorist Squad (ATS) officer in a cameo role in the 2018 film Simmba, which also starred Sara Ali Khan. Katrina Kaif stars as a doctor and Akshay Kumar’s wife in the film. The film also has extended cameos by Ajay Devgn and Ranveer Singh. Sooryavanshi is the fourth film in Rohit Shetty’s cop universe. Ranveer played the role of a police officer in the 2018 film Simmba while Ajay Devgn starred in the cop series Singham. The film has been produced by Karan Johar’s Dharma Productions.