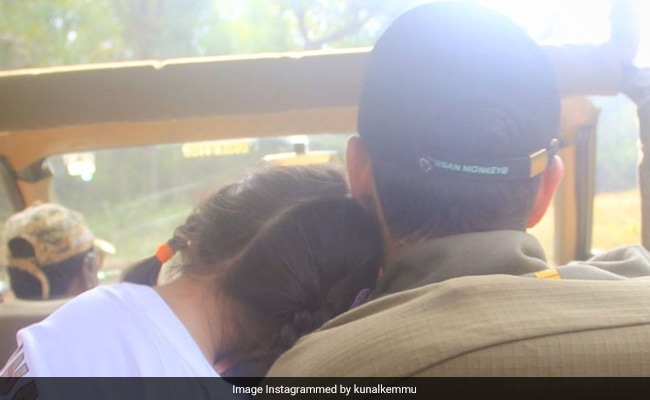 Kunal Kemmu recently shared a series of pictures on his Instagram handle, in which he can be seen enjoying his jungle safari with his wife, actor Soha Ali Khan and daughter Inaaya. Looks like the family had a blast spotting the tigers at the Tadoba National Park in Maharashtra’s Chandrapur district. The family also gave us major goals for their recent adventure. Sharing the pictures, the actor captioned his post, “The jungle book, Tadoba National Park.” The family can be seen in a jeep where Soha Ali Khan can be seen posing beside her daughter Inaaya and her Husband Kunal Kemmu. They are giving us major travel goals.

Kunal Kemmu also posed with his daughter Inaaya. The post gave a glimpse of the breathtaking pictures of his jungle safari. We could even see the actor getting candid with his lens. Sharing the same pictures on Instagram, Soha Ali Khan captioned it: “Don’t ask did you see a tiger?”

Before the actress went on this adventure trip she even asked her fans to wish her luck. Along with her fans, there were celebrities like Neha Dhupia, her sister Saba Ali Khan, who also wished her luck.

The couple got married in a closed ceremony on January 25 in 2015 and later welcomed their first child, Inaaya Naumi Kemmu. Kunal Kemmu had made his debut as a child actor in Sir and now has been a part of various films like Golmaal Again, Kalank, Malang, Lootcase, among others and he is now gearing up for his upcoming project, for which the details have not been disclosed.

Soha Ali Khan has featured in films like Ghayal: Once Again, Sound Proof, Saheb and many more.