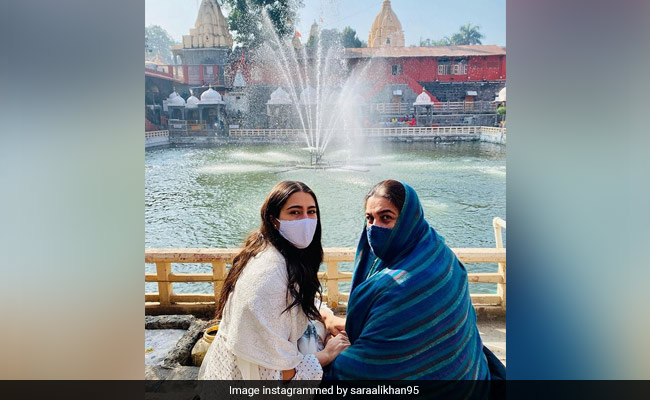 Guys, Sara Ali Khan has shared some pictures from her travel diaries. FYI: she is not in the Maldives. Don’t scratch your head, please. We will share details about Sara’s latest trip. She is in Ujjain, Madhya Pradesh. Travel buddy? Her mother, actress Amrita Singh.  Sara has dropped some glimpses from their trip and wrote, “Maa aur Mahakal.” Can we call Sara the queen of captions, please? The photos feature the mother-daughter duo at the Mahakaleshwar Jyotirlinga temple. Fans have flooded the comments section with fire and red hearts emoji.

Well, before this, Sara Ali Khan had taken a solo trip to the holy shrine too. See the pictures here.

Sara Ali Khan, who  is currently shooting for her upcoming film with Vicky Kaushal in Indore, often posts glimpses from her shoot days on Instagram. Along with the pictures, Sara wrote, “Bakri charana, Tractor chalana… Was it just photo ka bahana?Or Sara wishing it was a different zamana?.”

Sara Ali Khan loves to share snippets of the shoot life with her fans on Instagram. This one is from her latest release Atrangi Re, which also features Akshay Kumar and Dhanush.

Sara Ali Khan is busy with the shooting of her next film opposite Vicky Kaushal. The Laxman Utekar directorial is currently filming its Indoor leg. A lot of behind the scenes glimpses have been shared on various fan pages on social media. Sara made her Bollywood debut opposite late actor Sushant Singh Rajput in Kedarnath. She followed it with Simmba, opposite Ranveer Singh.

Sara Ali Khan has also worked in Love Aaj Kal and Coolie No 1.