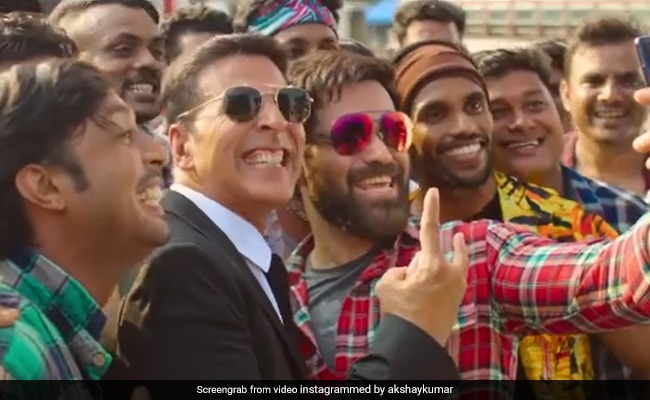 Akshay Kumar may have a slew of upcoming films on his plate, but the superstar is not slowing down. The actor has announced with a fun video that he will be seen in a new film titled Selfiee. In the video, the actor, dressed in a suit, is seen dancing in what appears to be a bus station. Joining him in the video is Emraan Hashmi, who will star along with Akshay Kumar in the movie. Sharing the video, Akshay Kumar wrote, “Presenting Selfiee, a journey that will drive you towards loads of entertainment, laughter & emotions. Shooting begins soon!” He also tagged Emraan Hashmi, producer Karan Johar as well as Malayalam actor, Prithviraj Sukumaran, who is also co-producing the film under his banner of Prithviraj Productions. The film will be directed by Raj Mehta.

In the poster, while Emraan Hashmi is seen dressed in a sombre T-shirt and jeans, Akshay Kumar is seen in a rather flashy golden jacket.

Found myself the perfect #Selfiee partner! Hey @karanjohar , have we slayed this selfie game or what????? @emraanhashmipic.twitter.com/N2YdXrYMCV

Karan Johar too replied to the tweet and said, “No two others can slay it like you both Akshay Kumar and Emraan Hashmi. Stay tuned, something big is coming up!”

Emraan Hashmi too shared a picture and wrote, “Joining the Selfiee club with Akshay Kumar!”

Before the picture of the two actors together, Akshay Kumar and Emraan Hashmi also posted individual pictures. Akshay Kumar shared his picture and said, “Kick-starting my day with a Selfiee! Because why not?”

Kick-starting my day with a #Selfiee!
Because why not????? pic.twitter.com/lAz3lw142Q

Soon, Emraan Hashmi joined him by posting a separate picture and said, “New look, new vibes! Inspired by Akshay Kumar to start today with a Selfiee!”

In addition to Selfiee, Akshay Kumar has several interesting films lined up such as Prithiviraj, Bachchan Pandey, Raksha Bandhan, Ram Setu and OMG 2 – Oh My God 2, among other announced projects. Meanwhile, Emraan Hashmi was last seen in Chehre alongside Amitabh Bachchan and Rhea Chakraborty.