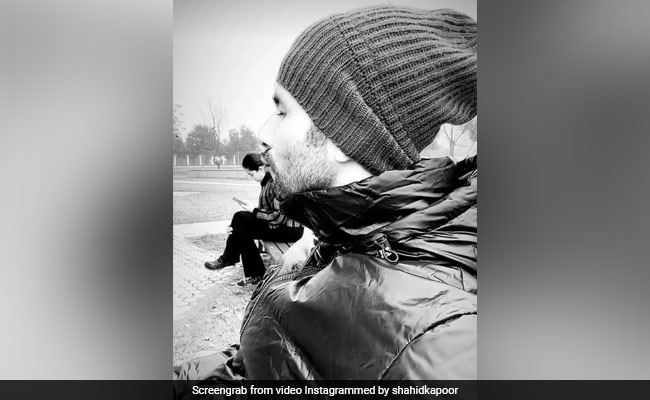 Shahid and Mira in a still from the video. (courtesy: shahidkapoor)

There is an abundance of love in the air and it is all thanks to Shahid Kapoor. The actor, who is known for his charisma and suave looks, brought a dose of good old mushy romance to Instagram. And his love was of course directed to his wife Mira Rajput, who seemed quite oblivious of the adorable clip that she was unwittingly starring in. In the video shared on social media, Shahid Kapoor and Mira Rajput are seen sitting several feet apart. While she is engrossed in her phone, Shahid Kapoor smiles and proceeds to kiss her silhouette confessing that he is okay to be her second love since her phone is her first love.

In the caption of the video, Shahid Kapoor wrote, “Her first love is what she is staring at. But I’m ok being her second love also.” He further joked, “What to do…Love is like that only.”

Among the first few to reply was Shahid Kapoor’s brother, Ishaan Khatter who dropped not one but two comments. In the first, he wrote, “Aww.” In the second comment, he wrote, “Straighten your back,” tagging Mira Rajput. To this, she said, “Ya okay. I was trying to look at something intricate on the phone now leave me alone.” She also added, “And this is the puffiest jacket ever. Deceptive.”

Shahid Kapoor is not the only one who has indulged in a fair bit of PDA over the past few days. When Shahid Kapoor shared a selfie recently, Mira Rajput could not stop herself from commenting, “Selfie Queen.”

Mira Rajput too shared a photo of her hugging Shahid Kapoor on the occasion of New Year and said, “It’s going to be a great one because Mr K agreed to a photo. Happy New Year everyone. For the first time I’m comfy as hell on NYE. Pyjamas, fuzzy socks, and bear to love. Can we do this every year?”

Before that Mira Rajput had shared a rather frame-worthy image of the couple standing hand-in-hand and all smiles. In the caption, Mira Rajput wrote, “Shall we frame this in life-size for the living room while I fix your tie on a stool?” referring to the iconic scene featuring Amitabh Bachchan and Jaya Bachchan from Kabhi Khushi Kabhie Gham. She also added the hashtag “parampara.”

Shahid Kapoor and Mira Rajput have been married since 2015. They have two children together, Misha and Zain.