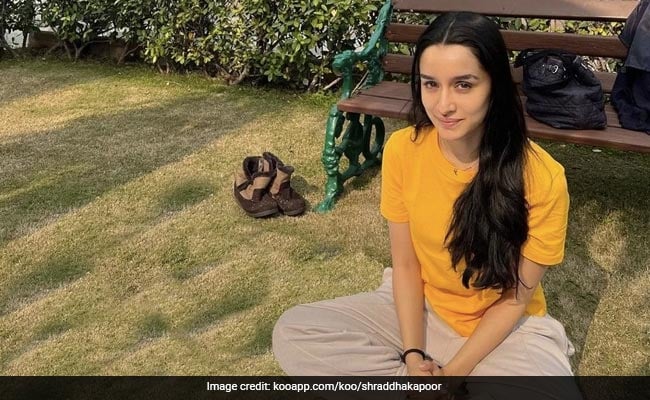 If we had to pick an actress who would fit the bill of Bollywood’s “sunshine girl,” it would be Shraddha Kapoor without a doubt. The actress, who is known for her effervescent charm and gorgeous looks, likes to keep it simple both on-screen and off-screen. The actress who is a breath of fresh air on social media has now brightened our Monday with a lovely photo on the Koo app. In the image, a bare-faced Shraddha Kapoor is seen sitting on the grass on a lawn, basking in the warmth of the morning sun. We can also spot her shoes on the grass and backpack placed on a bench behind her.

Shraddha Kapoor also shared a lovely couplet with the photo. In Hindi, the actress wrote, “ Nazar aayi, subah ki pyaari muskuraahat, rooh mei khil utte, ek gehri chaahat. (I got a glimpse of the morning’s lovely smile. Now, a deep desire has bloomed in the depths of my soul.)” She ended the caption with the sun, purple heart and tree emojis.

Fans and followers of the actress loved the picture and the shayari, making sure to praise her in the comments.

Recently, Shraddha Kapoor created waves on social media on the occasion of International Day For The Elimination Of Violence Against Women by articulating her thoughts on what we as a society can do to extend support to help stop any form of violence against women. Speaking to Nishtha Satyam, Country Representative, Timor Leste, UN Women on the occasion, Shraddha Kapoor extended her support to women in need. Sharing a video on the Koo app, the actress explained that it is important to understand that violence is not just physical. “And, some of this violence doesn’t leave any visible sign due to which they go completely unnoticed for several years. It can affect the victim physically and emotionally at various stages for several years. So, it is important to discuss such forms of violence and spread awareness about them,” she explained.

On the work front, Shraddha Kapoor was last seen in Baaghi 3 and the music video Kill Chor. She will be seen in Luv Ranjan’s next film.