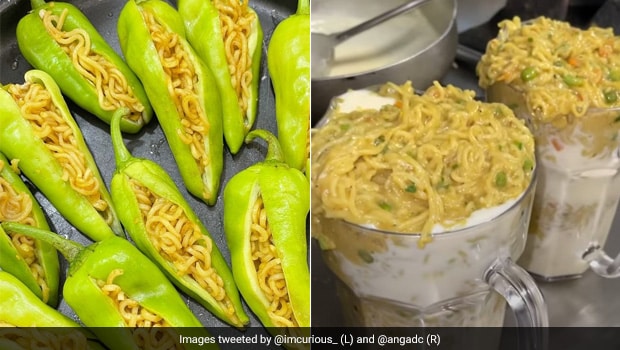 If there’s one thing that Indians are famous for, it has to be their keen sense of innovation of ‘Jugaad’. We can invent practically anything out of the minimum resources given to us. Maggi, for instance, is a popular instant noodle that is consumed throughout the country. However, in the recent past, we have seen it being used as an ingredient to create an array of dishes. From stuffing Maggi inside preparations to inventing all sorts of weird concoctions with it, there’s no dearth of creativity when it comes to Maggi dishes. While some dishes are intriguing and worth a try, others are simply bizarre and confusing.

Here Are 7 Weird Maggi Dishes That Confused The Internet:

If you thought stuffed capsicum was the last straw, wait till you see this Bharwan Hari Mirch maggi. Slit green chillies are filled with cooked maggi in this bizarre creation. Check it out:

We know Maggi is passionately loved by foodies, but this Maggi milkshake was completely over the top. The frothy treat was seen topped with the instant noodles in this picture. Take a look:

Makki Di Roti is a popular bread consumed with Sarson da Saag in the cold winter months. But can you imagine pairing the Roti with Maggi noodles? See for yourself:

When in doubt, there’s always Pakode! However, this eccentric Maggi ke Pakode captured by a popular food blogger raised plenty of eyebrows on the internet. Watch here:

Pani Puri is one street food that chaat lovers swear by. However, even the most zealous Pani Puri lovers had a hard time digesting this Maggi-stuffed Pani Puri. Check it out:

Believe it or not, internet users came up with an absurd Laddoo preparation made with Maggi noodles. The picture shows a dessert prepared by shaping Maggi noodles into a ball and decorating it with dry fruits on top. Take a look:

While there are many flavours of Maggi out there, this Chocolate flavoured Maggi was indubitably one of the most strange ones in the recent past. Check it out:

What did you think of these weird Maggi dishes? Tell us which one you’d like to try in the comments below.