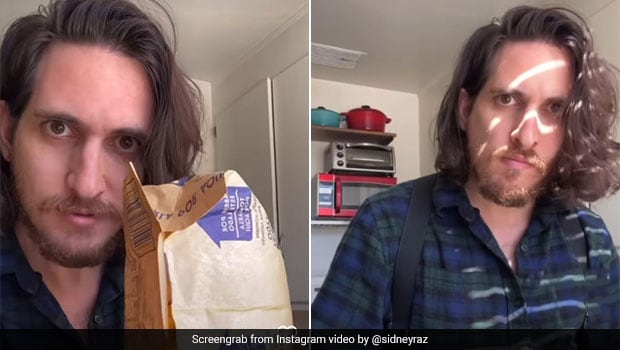 If there’s one invention that has inevitably changed the way we cook, it has to be the microwave. Even celebrated master chef Gordon Ramsay recommends cooking in the microwave as it can be extremely helpful at times. One of the most commonly made foods in the microwave is the microwave popcorn. Readymade bags of the salty snack can be purchased from supermarkets or local stores. All you need to do is simply allow them a few minutes and your microwave popcorn is ready to be consumed! However, we often see a few unpopped kernels remaining at the bottom of the bag. If you’re wondering how to tackle this issue, we have found a microwave popcorn hack that could definitely come in handy. Take a look:

(Also Read: This Genius Hack Lets You Fit Two Bowls In A Microwave, And All You Need Is A Mug)

The microwave popcorn hack was shared on Instagram by blogger @sidneyraz, who is known to tell his followers some interesting things which he feels they should know in their 30’s. The video has received over 1.1 million views and nearly 60k comments since the time it was shared. “The solution was there the whole time,” he wrote in the caption.

In the short clip, the blogger explained the entire process of making microwave popcorn. He said that the unpopped kernels are actually supposed to be removed before eating the popcorn. “You’re supposed to shake out the popcorn kernels that haven’t popped,” he exclaimed. He then demonstrated how making popcorn in the microwave left a small opening at the top of the bag. A series of quick shakes would expel the unpopped kernels, leaving behind a packet of perfectly popped microwave popcorn!

How easy and effective, right? Instagram users were blown away by this incredible yet simple hack. “Best post you’ve made,” wrote one in the comments while another said, “This changes many things!” Several also suggested that the small opening was actually perfect to remove the kernels.

What did you think of this game-changing microwave popcorn hack? Tell us in the comments below.