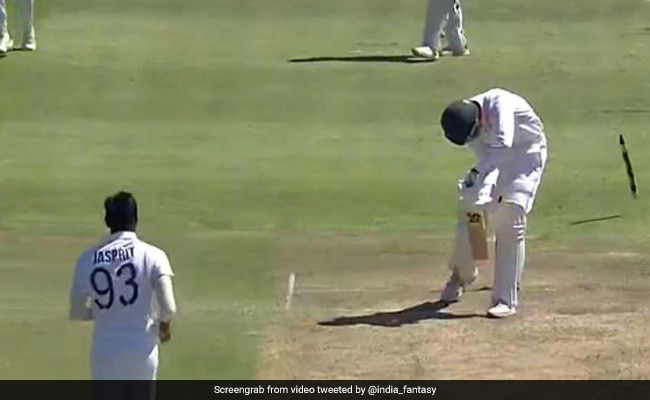 During the second Test between India and South in Johannesburg, Jasprit Bumrah and Marco Jansen were involved in a heated conversation after the latter had bowled a series of bouncers to the India pacer, who had to cop a few blows on his upper body. Both players had exchanged a few words after that and the umpire had to interfere to separate the two. Their on-field battle continued in the ongoing Test, but Jansen was on the receiving end this time around. This time, however, there were no words exchanged.

Bumrah targeted Jansen, his former teammate at Mumbai Indians, and rattled the South African youngster with a couple of bouncers. He then took the perfect revenge from the lanky pacer, sending his off-stump cartwheeling with a fuller length delivery that came back in.

The incident happened at the stroke of Tea when Bumrah bowled a length ball, around off, which nipped back off the deck, leaving Jansen completely bamboozled as his off-stump went cartwheeling in the background.

PS: Thanks ra Jansen, I’ve been waiting to look at this ever since the previous test! pic.twitter.com/AxvysjwmJg

Bumrah took his seventh five-for in Test cricket, his second in South Africa, as India took a narrow 13-run lead over the Proteas in the first innings.

The hosts were bowled out 210 after India had posted 223 on the board, courtesy Virat Kohli’s brilliant innings of 79 on Day 1.

The Indian skipper came out to bat again on Day 2 after India lost both the openers KL Rahul and Mayank Agarwal in their second innings in the final session on Wednesday.

Kohli was unbeaten on 14 while Cheteshwar Pujara (9*) was also in the middle as India ended Day 2 at 57 for two, leading South Africa by 70 runs.