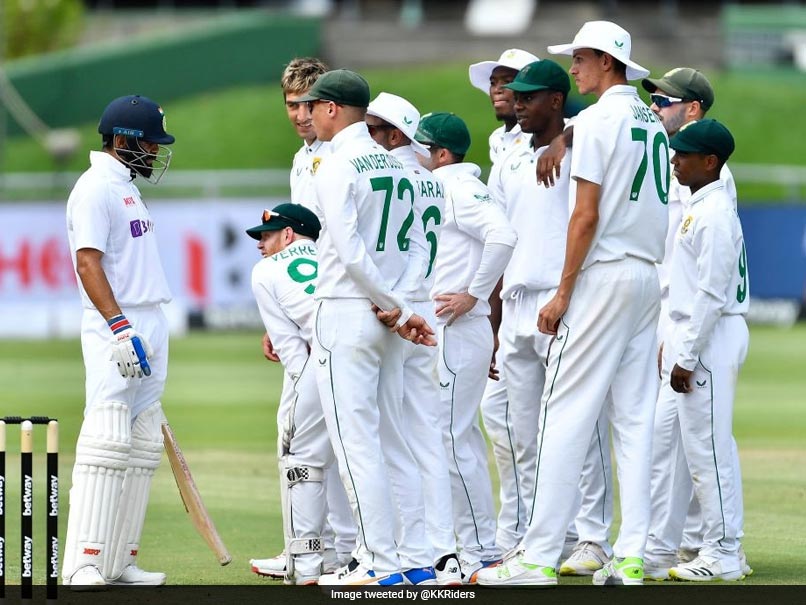 The first day of the third Test match between South Africa and India lived up to expectations generated from their earlier duels in the ongoing series. The ups and downs on Day 1 proved that the decider could well be headed towards a fitting end to a well-contested series. Apart from the class of the South African bowlers on display, the visitors were led by a confident Virat Kohli, something that reflected on his movements, footwork and an array of mesmerizing strokes. However, the returning Indian skipper did find himself in the middle of some chit-chat on the field on certain occasions. One such event happened when there was a massive caught-behind appeal against him off Duanne Oliver’s bowling.

DRS showed there was a tiny spike on the UltraEldge, however, further slow-motion replays captured the ball kissing the thing-pads instead of the bat.

While the Proteas players stood firm on their ground quite visibly shocked, Kohli and opposition captain Dean Elgar engaged in a chat which ended with the latter shaking his head in disappointment.

A smile to kick off Kohli’s new year pic.twitter.com/45HYj55MDx

Kohli never shies away from a ‘friendly’ chat pic.twitter.com/2brc33VEtE

The shake of the head. McGrath would be proud pic.twitter.com/rqyl09HGI3

However, despite all the events that transpired, the image of Kohli standing in front of the SA players showed ironically, how he was India’s lone fighter last night.

How would you rate this innings amongst Virat Kohli’s 100 knocks? #SAvIND #CricketTwitter pic.twitter.com/stukLaMVIG

Reactions to that image came from all quarter of the cricketing circle:

Kohli was finally dismissed for 79 runs as he ran out of partners towards the end of the innings. India finished with 223 runs on the board.

SA, in reply, were placed at 17/1 at Stumps as they lost the key wicket of skipper Elgar to pacer Jasprit Bumrah.